The Changing Face of Brighton’s Beer Houses and Gin Palaces 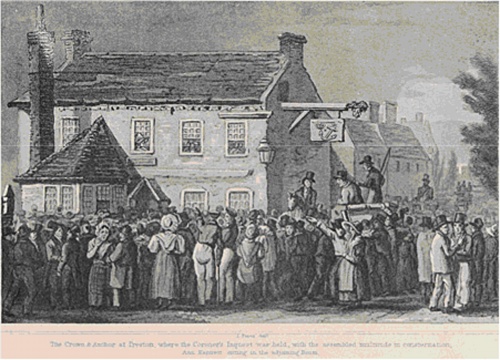 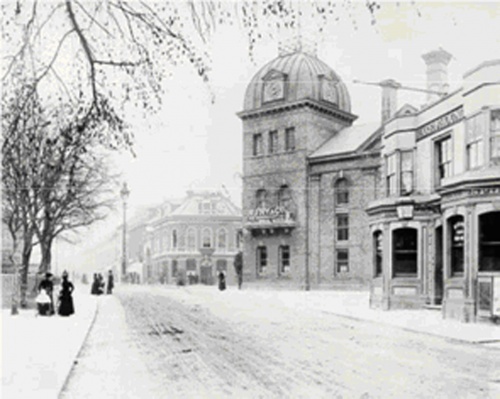 I have been thinking about pubs a lot recently, where to go for lunch on Mothering Sunday, possible venues for my “big” birthday party, places to meet friends. It seems to me that pubs and pub culture have changed a lot recently and I no longer have the comfort and certainty of old favourites to go to.

But this has always been the way with pubs; they do not stay the same. From the outside, little might appear to have changed for hundreds of years, but inside they have adapted to reflect changes in society and fashion. The photograph of Preston Circus in the 1880s is a good example of this change over time. When the picture was taken Amber Ale Brewery, established in the 1820s, dominated Preston Circus with a very large clock tower and a domed roof. The brewery was later bought by Henry Longhurst, but was partly demolished in 1901 when Brighton Corporation paid £25,000 to acquire the site in order for tramlines to be laid on a curve between Beaconsfield Road and Viaduct Road. The remaining part of the brewery building was adapted to become the Fire Station (since rebuilt) and the malting was incorporated into the Duke of York’s Cinema in 1910.

The Hare and Hounds, in the foreground of the picture, was originally built in the 1820s, with the first license granted in 1825. The building was re-fronted in 1870 and then totally rebuilt in 1905. In the early nineteenth century annual Brewsters' Sessions were held on the upper floor. Today it is a newly refurbished live music and comedy venue. The Stanford Arms, in the background, has always been in the very centre of Preston Circus in the midst of the traffic - horse, tram or car. In the 1960s, the pub’s upstairs rooms became home to the Stanford Folk Club where a list of artists, including Ralph McTell and the Copper family, performed to large audiences every Sunday night. In recent years, the pub has undergone a dramatic transformation to become café bar Circus Circus.

The fact that this early snapshot contains two public houses is not really a surprise; by the 1800s pubs were appearing on every street corner. A bit of an exaggeration perhaps, but official figures do confirm that there were 41 inns and taverns in the town, equivalent to one inn for every thirty houses. Indeed, some of Brighton’s most famous pubs were established by 1791: The Old Ship, The Spotted Dog (now The Hop Poles), The Cricketers, The Castle, The Black Lion, The Unicorn and, of course, The Crown and Anchor just along the road from Preston Circus at 213 Preston Road.

This public house really has gone through some changes over its very long history. It dates back to at least 1711 when it was the first stop for coaches outside Brighton. Until 1844, the small Preston Parish workhouse and lock-up, known locally as the “Black Hole”, stood at the rear. Like all local inns of the time, the Crown and Anchor served many purposes, one was to act as a venue for Coroner’s Inquests, probably because its cold cellar could double as a mortuary. In 1832, the inquest was held there into the death of Celia Holloway whose body had been found buried in Lover’s Walk. The jury returned a verdict of “Wilful Murder” against her estranged husband, John Holloway, who was committed by the Coroner, J C Ellis, Esq., to the County Goal at Horsham for trail. (Celia Holloway is buried in the churchyard almost opposite the pub). In 1894, the pub was rebuilt to include accommodation and an assembly room with a gymnasium. The gym gradually gained a reputation in the boxing world and attracted famous boxers right up until the 1960s.

21st century social and legal developments have brought in their wake yet more changes for the pub trade to embrace. Pessimists have predicted the demise of our beer houses and gin palaces, but more optimistic publicans look at the 400 plus places there are to buy a drink and do not foresee the end of Brighton as the “Queen of Watering Places”. Darren, the landlord of the Hare and Hounds, in particular, is looking to a positive future. He expects that the large investment local government and private investors are pledged to make in Preston Circus and London Road will mean that pubs in the area will not only survive but flourish in the next five to ten years.

The question left for me is which ones do I want to frequent!